Your Pharmacists At Kwik-Rx Pharmacy 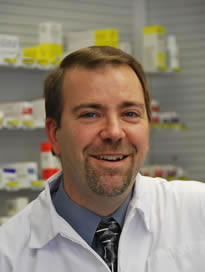 In June of 1999, he began working with Rob Jackson at Medicap Pharmacy in Harlan, which eventually became Kwik Rx Pharmacy. Tom enjoys the fact that the small town pharmacy environment in Harlan enables the pharmacy staff to provide personal friendly pharmacy care for the patients of Harlan and surrounding area. 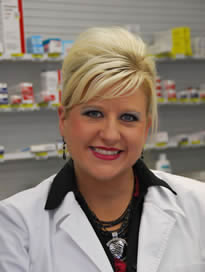 Angela Smith grew up in Avoca, Iowa and was raised in the restaurant business that her family had. Although this upbringing provided her with lots of customer service experience and work ethic, she decided that path wasnʼt for her. During her pre-medical undergrad at U of I, she got a job at Pearsonʼs Drug Store which was a locally owned pharmacy, compounding shop, and soda fountain. She fell in love with the work and decided to pursue a degree in pharmacy. She graduated from The University of Iowa College of Pharmacy in Iowa City with her Doctor of Pharmacy degree in 1999. She has worked in various retail and compounding settings before coming to KwikRx Pharmacy in 2007. She enjoys the warm, personable service that an independent pharmacy in a small town offers. Working in a pharmacy can be challenging but she finds it very rewarding knowing she can make a difference in someoneʼs day and hopefully brighten it with a smile, a few kind words or helping out in any way she can. In her free time, she enjoys spending time with her husband Paul and twin sons, Parker and Chase who are 7 years old. She also enjoys traveling, antiquing, spending time with friends, and music.